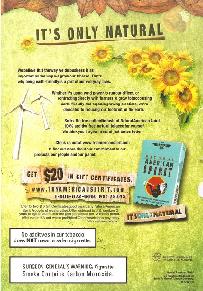 TASTE NATURE.
AND NOTHING ELSE.

You'll never find any additives in our tobacco. What you see is what you get. Simply 100% whole-leaf natural tobacco. True authentic tobacco taste. It's only natural.3

…[C]onsider the&#133argument that what is natural is somehow good and what is unnatural bad. …[T]he principle is rarely stated so explicitly, but if we look at what people actually do, this does seem to be an assumption that underlies people's behaviour. Consider, for example, the popularity of "natural" remedies. A great many people would always prefer to take a "natural" remedy over an "artificial" one. Similarly, people prefer foods that have "all natural" ingredients.

One obvious point to make here is that this very characterization of certain things as "natural" is problematic. What always strikes me about health food shops are the rows and rows of bottles and tablets. A greengrocer seems to be a much better source of natural products than such collections of distilled essences and the like. …

However, let us set aside such doubts about the category of "the natural" for the moment and just ask, even if we can agree that some things are natural and some are not, what follows from this? The answer is: nothing. There is no factual reason to suppose that what is natural is good (or at least better) and what is unnatural is bad (or at least worse).4

An argument appeals to nature when it claims that something is good because it's natural, or bad because it's unnatural. What is logically wrong with such arguments?

One difficulty is that the concept of the natural is vague and ambiguous. For instance, is the human use of fire "natural"? Maybe, maybe not. Is it "natural" for people to wear clothes? Yes and no.6 This means that people can pick and choose what they wish to praise as "natural" or condemn as "unnatural".

Nonetheless, the word "natural" is loaded7 with a positive evaluation, while "unnatural" contains a negative evaluation. So, to call something "natural" or "unnatural" is not simply to describe it, but to praise or condemn it. As with other loaded words, unless such concealed evaluations are backed up by other evidence, they will beg the question.

The reader may still feel that there is something right about some appeals to nature. For instance, a diet rich in natural foods―such as fruits, vegetables, and whole grains―is probably better than one based on more artificial foods―such as candy, pastries, and sausages. Also, it seems likely that a natural lifestyle―that is, one based on a natural diet and exercise―is in general a healthier one than a sedentary life spent playing video games and eating doughnuts.

These forms of argument could be treated as rules of thumb which admit some exceptions, but are still reliable enough to be useful. So, the fact that something is either natural or unnatural would give it only the presumption of goodness or badness, and that presumption could be rebutted by contrary evidence8.

So, at best, the appeal to nature is not a fallacy but a useful rule of thumb in some limited areas, such as diet and lifestyle. Moreover, even in those areas, some "natural" things―such as tobacco―are unhealthy, and some "unnatural" acts―such as brushing your teeth―are healthy.

American Spirit uses the slogan "it's only natural" and claims that its cigarettes are "100% natural tobacco". Some smokers may buy American Spirit cigarettes because they believe that "natural" tobacco is in some way safer or healthier than tobacco that contains additives. However, the carcinogens in cigarettes that cause cancer are natural components of tobacco.

A: I can see why you'd think that, but I hesitate to classify it that way because some ethical theories may make what is natural relevant to what is good. Of course, any simple equation of the natural with the good is easily refuted by counter-examples such as tobacco, hemlock, etc. However, a more complicated definition might be immune to such refutation. More importantly, this is not really a logical problem, but a philosophical one. The logical problems with appealing to nature are the result of the vagueness and loadedness of the concept of the natural. I suspect that most people who appeal to nature are confused by the vagueness or loadedness of the term "natural", and will realize their mistake when counter-examples are pointed out to them. But if someone still insisted on appealing to nature in the face of counter-examples, I would think that they were making a philosophical mistake rather than a logical one.