The Puzzle of the Masked Men

During a bank robbery, one of the masked robbers shot a bank guard. The police caught all four robbers and interrogated them in an attempt to determine which was the shooter. Each was questioned while attached to a lie detector machine and testified as follows:

According to the lie detector operator, either all but one of the robbers lied or all but one told the truth―he couldn't tell which―and this was confirmed by subsequent evidence. The police are confused and come to you as a logician for help. Can you determine who shot the bank guard?

Update (10/9/2013): Unfortunately, the Spanish version of this entry no longer exists.

The new movie Sleep Dealer has a dangerous title: it's an invitation to critics to make jokes about how accurately it's titled because it's a cure for insomnia, etc. Despite that, ads for the movie sport the blurb: "'Exuberantly Entertaining!' A. O. SCOTT, THE NEW YORK TIMES". However, the quote is not taken from Scott's review of the movie, but from a report on a film festival where it was shown. This is a bad sign. Here's the entire reference to the movie in that article:

Perhaps the most overtly political film I saw was Alex Rivera’s "Sleep Dealer," which was also the most exuberantly entertaining, a dystopian fable of globalization disguised as a science-fiction adventure. Showing some of the manic inventiveness of Richard Kelly’s "Southland Tales," but with a hundred times more intellectual clarity and storytelling discipline, Mr. Rivera―a brilliant young director―takes his audience into a future of "aqua-terrorism" and cyberlabor that I wish I could dismiss as implausible.

They should send some legs aid, too.

Ludwig Wittgenstein once remarked―or was it joked?―that a good book of philosophy could be written entirely in jokes. Now, two philosophers have tried―twice!―to prove him right: Thomas Cathcart and Daniel Klein have written Plato and a Platypus Walk into a Bar…: Understanding Philosophy through Jokes and Aristotle and an Aardvark Go to Washington: Understanding Political Doublespeak through Philosophy and Jokes. The first book includes a chapter of logic jokes, with some related to fallacies, and the second sounds especially interesting for us. Of course, I would love to receive review copies, and that's no joke!

Sample Joke: Here's one from the Soviet bloc:

QUESTION FROM ARMENIAN CITIZEN: Is it true that last Sunday Akopian won a hundred thousand rubles in the state lottery?

ANSWER FROM GOVERNMENT SPOKESMAN: Yes, it is true. Only it was not last Sunday, but Monday. And it was not Akopian, but Bagramyan. And not in the state lottery, but in checkers. And not a hundred thousand, but one hundred rubles. And not won, but lost.

That reminds me of the way that politicians keep their promises.

Resource: Plato and a Platypus. This is the website for both books, where you can read their introductions, reviews, and other materials.

Exercise for the Reader: There's one error in the discussion of fallacies in the introduction to Aristotle and an Aardvark Go to Washington; see if you can spot it. If you think that you have, please let me know. 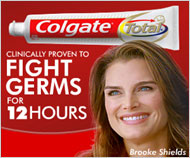 While sitting in a clinic waiting room today, I looked at a copy of WebMD magazine; it was the only thing they had to read other than sports magazines, car magazines, and women's magazines. At the top of the front cover, the magazine calls itself: "The WAITING ROOM COMPANION Created for Your Doctor's Office", so I suspect that it's given away free to physicians, and makes money from advertising. Inside the front cover was an ad for Colgate Total® toothpaste, which read:

Research suggests that the gateway to the health of your body may be your mouth. So it's good to know COLGATE TOTAL® actively fights germs for a full 12 hours, which helps to prevent and reduce the gum disease gingivitis. If left unchecked, gingivitis can lead to serious gum disease, which emerging research associates with other diseases like heart disease, stroke and diabetes.

We've previously encountered the phrase "emerging science" (see the Resource below), and "emerging research" must have a similar meaning, that is, research that is either incomplete or inconclusive. The phrase suggests that using the toothpaste will help prevent heart disease, strokes, and diabetes, even though research doesn't actually support such effects. "Emerging" implies that one day the research will have emerged, and at that point it will show that Total® toothpaste is good for much more than just cleaning your teeth. However, the research may well emerge stillborn, as it may turn out to be wrong.

At the bottom of the page in fine print, you can read―if you're either nearsighted or have reading glasses:

This is a good example of "the fallacy of accent" in Morris Engel's sense, that is, manipulating emphasis. In this case, de-emphasizing the above sentences serves to downplay important but inconvenient facts. The smaller the print, the more important the information!

In addition to doublespeak and accent, Colgate also appeals to celebrity by using Brooke Shields in some of its ads for Total®. I'm not sure what the rationale is supposed to be for this appeal: is it that Shields has such white teeth? If so, how do we know that her teeth are so white from brushing with Colgate toothpaste, and not from expensive whitening treatments from a dentist to the stars?

People often don't appreciate how difficult it is to establish causation, and jumping to causal conclusions based on inadequate evidence is the source of all the causal fallacies. For instance, it seems to have become conventional wisdom that moderate drinking of alcohol is good for you, but according to an article in yesterday's New York Times, the evidence may be insufficient:

The article also discusses the influence of the alcohol beverage industry on medical research:

In 2006, … a Boston University physician who has championed the benefits of alcohol, hosted a conference on the subject. A summary of the conference, published a year later, said scientists had reached a "consensus" that moderate drinking "has been shown to have predominantly beneficial effects on health." The meeting, like much of [his] work, was partly financed by industry grants. And the summary was written by him and…a senior vice president for the International Center for Alcohol Policies, a nonprofit group supported by the industry. The center paid for tens of thousands of copies of the summary, which were included as free inserts in two medical journals, The American Journal of Medicine and The American Journal of Cardiology.

I doubt that alcohol industry financing would directly influence the research, but it pays to publicize only those studies whose results are favorable to the industry. This may well have led the public and physicians alike to jump to the conclusion that alcohol is good for you. What's missing are experimental studies, but there may be insurmountable problems involved in giving experimental subjects alcohol without their knowledge. However, if there is actually no causation, just a correlation, how much damage will have been done to the general public by leaping to a false conclusion? An old magazine ad for Silva Thins cigarettes has the following copy:

Advertisements are often enthymemes, and frequently lack a conclusion. The missing conclusion is usually that you should buy the product advertised, or some related proposition. The reason why arguments in ads usually don't spell out their conclusions is that we all understand that the purpose of ads is to sell the product advertised. So, in the specific case of the Silva Thins ad, we realize that it's trying to get us to buy Silva Thins cigarettes.

The enthymeme in the ad has two premisses:

What about the Little Big Horn?

Solution to the Puzzle of the Masked Men: Benjy shot the guard. There are only eight possible distributions of truth-values, given that either all but one of the statements is true or all but one is false: four for each of the two possibilities depending on which of the four statements is the odd man out. So, to solve the puzzle, you can go through these possible distributions of truth-values until you've eliminated all but one.

An easier approach is to recognize that since Denny denies what Benjy said, their two statements must have opposite truth-values. This means that the other two statements are either both true or both false, thus eliminating four possible distributions. Suppose that Benjy spoke the truth and Denny was wrong. Then Charlie must be the guilty party, since Benjy accused him truly. That means that Charlie's own statement must be false, in which case Alfie's statement must also be false. However, since Charlie is the guilty party―and only one of the robbers shot the guard―Alfie is innocent, so his statement would be true. It's impossible for him to be both innocent and guilty, so the assumption that Benjy spoke the truth and Denny didn't must be mistaken.

Therefore, we can conclude that Benjy was wrong and Denny spoke the truth. So, Charlie isn't guilty after all. Suppose that Alfie and Charlie's statements are both false: then Alfie must be the guilty one, since he falsely claims innocence. However, if Alfie is guilty, then Charlie's statement was true, not false. Thus, the only remaining possibility is that all the statements were true except Benjy's. So, it's true that either Alfie or Benjy is guilty, since Charlie spoke the truth. However, it's not true that Alfie is guilty, since he correctly claimed innocence. Therefore, the guilty party must be Benjy.

Acknowledgment: The puzzle was suggested by one from Marilyn vos Savant's book Of Course I'm for Monogamy: I'm Also for Everlasting Peace and an End to Taxes (1996), pp. 164-165.