This weblog has been rather quiet this month, partly because I've started revamping the files for individual fallacies. This has required considerable revision of some individual entries, such as the Multiple Comparisons Fallacy. This reconstruction of the entire site is a large undertaking that will continue into the new year.

Thanks to all who have supported this website over the last year, whether by visiting the site's advertisers, buying something through the links to Amazon, or donating directly via PayPal. Your support is much appreciated!

It's a listicle! They're all the rage. Tim van Gelder, of "Critical Thinking on the Web" fame, has a new article on critical thinking habits. This is a good list, I think, though the limitation to seven habits is rather arbitrary―it's based on the old self-help book The Seven Habits of Highly Effective People. However, it's a somewhat artificial numbering since the first habit van Gelder lists includes four sub-habits, and some of the later habits also have sub-habits, so that I'm not sure how many habits there are altogether. However, they're all worthy habits to cultivate. Check it out.

I've added an especially outrageous contextomy of Bill Gates to the Familiar Contextomies page. Check it out.

That's taking same-sex marriage too far, but it's nothing we haven't seen before: 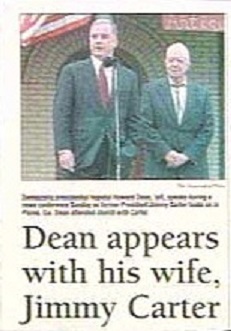 Two recent articles in Slate show the harmful effects of failure to vaccinate, and at least one of its causes. Phil Plait reports that the number of measles cases this year has been almost three times the average, and most of these cases have occurred in communities with low rates of vaccination.

On the anti-vaccine side: Couric's guests included a mother whose daughter died of undetermined causes 18 days after getting the vaccination; another mother and her daughter, who came down with a hodgepodge of symptoms that sound an awful lot like depression a few days after the vaccine; and Dr. Diane Harper, a skeptic of the Centers for Disease Control and Prevention's push to vaccinate all girls…. On the pro-vaccination side, Couric only hosted one guest, Dr. Mallika Marshall… [who] was only given a few minutes to state that vaccines are safe and that the side effects mentioned by other guests were probably unrelated to the vaccine. Unfortunately, Couric and her producers allowed these facts to be totally overshadowed by the heartrending tales told by the two mothers.

Unfortunately, this is a fairly typical example of how the news media report on scientific or medical issues: emotional anecdotes are allowed to overwhelm boring statistics. Anecdotes of health problems that occur after vaccination are likely to lead some viewers to think that the vaccines caused those problems. A token physician or scientist is brought out briefly so that the reporters can claim that they gave both sides of the story. Now, of course, the HPV vaccine does not prevent measles, but stoking fears about one vaccine may well contribute to a general fear of vaccination.

Update (12/11/2013): To her credit, Katie Couric has published a response to critics of the show that admits―amidst a good bit of bloviation―that some of that criticism was correct:

Last week we devoted several segments on my TV talk show to the issues surrounding the HPV (human papillomavirus) vaccine. … Following the show, and in fact before it even aired, there was criticism that the program was too anti-vaccine and anti-science, and in retrospect, some of that criticism was valid. We simply spent too much time on the serious adverse events that have been reported in very rare cases following the vaccine. More emphasis should have been given to the safety and efficacy of the HPV vaccines. … Some people say their children have suffered from a variety of medical problems after the vaccination, and there have even been a few reports of death. As a journalist, I felt that we couldn't simply ignore these reports. That's why we had two mothers on the show who reported adverse reactions after their daughters had been vaccinated for HPV. … There is no definitive proof that these two situations were related to the vaccine. … However, the time spent telling these stories was disproportionate to the statistical risk attendant to the vaccines and greater perspective is needed. … The concern among many people is whether the benefits of vaccination outweigh the risks. Our goal in doing this show was to help parents make an informed decision about the HPV vaccine, not cause irrational fear. Right now, science is telling us that the benefits far outweigh the risks and that adverse reactions are exceptionally rare events. … I know there is a segment of the population that has expressed intense concern over vaccines in general and that this is an emotional issue for some. But based on the science, my personal view is that the benefits of the HPV vaccine far outweigh its risks.

Update (12/22/2013): I didn't notice at the time I wrote the original entry above, but Phil "Bad Astronomy" Plait described Couric's show in detail shortly after Marcotte's article appeared. Plait makes clear what I perhaps only suggested above, namely, that the fact that a girl has some kind of health problem after being vaccinated is no evidence that the vaccine caused that problem. Given the large numbers of girls receiving this vaccine, it's inevitable that many will come down with some type of illness some time after the shot. Unfortunately, shows such as Couric's are likely to prime people to attribute such coincidences to cause and effect. This is the same process that led to the false linking of vaccines and autism.

Another article I missed is by Seth Mnookin, author of The Panic Virus. According to Mnookin, he was contacted by a producer for Couric's show months before the episode aired, but was eventually told that he wouldn't appear. In his communications with the producer, Mnookin was given the impression that the approach of the show would be the opposite of what it turned out to be. So, it appears that the show set out to debunk irrational fears of vaccination but ended up stoking them. I wonder exactly what behind-the-scenes maneuvering led to that change.

Though I doubt it has much to do with the controversy over the vaccine episode, Couric's show has been cancelled and won't be renewed for next fall.