Logical fallacies can be humorous, especially the linguistic ones based on ambiguity or vagueness, which are often the source of puns. This page collects together funny signs and traditional jokes based on logical fallacies.

The main purpose of this page is to have a few laughs, but you can also learn something about fallacies while doing so. After each joke or sign there is a link to the relevant fallacy in the files. You can test your understanding by trying to figure out what fallacy the humor in an example is based on, then clicking on the word "Fallacy" beneath it to see if you are right. The important thing is to understand what went wrong logically in the examples, rather than to be able to identify fallacies by name―though there's nothing wrong with that, either!

For more fallacy-based humor, see the separate page for Humorous Headlines on the Main Menu to your left.

Two men were waiting on a platform for a train to arrive. The older, middle-aged man was dressed in a conservative business suit and carrying a briefcase. The younger one was dressed in jeans and a sweatshirt, and was carrying a backpack. The older man glanced at an expensive gold wristwatch. Seeing this, the younger man asked: "What time is it, sir?" The older man didn't answer; in fact, he didn't even seem to notice the question. "Excuse me, sir," the younger man asked again, "Could you please tell me the time?" Again, there was no answer. After a pause, the younger man continued: "Hey, I saw you look at your watch. I don't have one. I asked you politely for the time. Why can't you tell me?" Finally, the older man turned to the younger one. "Look," he said, "if I tell you the time, we'll strike up a conversation. We'll get to know each other and become friends. I'll invite you to my house one evening for dinner. You'll meet my lovely unmarried daughter who is just about your age. You'll ask her out on a date and end up falling in love with her. She'll also return your feelings since you're just her type. You'll ask her to marry you, and she'll accept. The two of you will get married." The older man stopped talking at that point. "Assuming that all that happens as you say," the younger man replied, "what would be so wrong with that?" "I don't want my daughter marrying a man who can't afford a watch!"2

They're vegan as of now.4 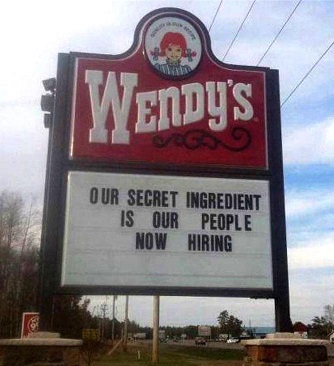 No wonder they're hiring.5

A Gentile man met a nice Jewish girl and fell in love with her. He asked her to marry him, but she told him that she couldn't do so unless he converted to Judaism. The man, who wasn't particularly religious, had only one problem: he was uncircumsized and would have to have the procedure performed in order to convert. He talked to a male Jewish friend:

"Well, I was only about a week old when it was done, so I don't really remember any pain," Irving answered. "But I can tell you this: it was nearly a year before I could walk!"2