A Puzzle in Wonderland Forest

There are exactly three kinds of animal in Wonderland Forest: bandersnatches, snarks, and boojums. These categories are not necessarily mutually exclusive, that is, it's possible for an animal to belong to more than one. All of the following statements are facts about the animals in the forest:

From these facts can you determine what percentage of animals in Wonderland Forest are of all three types, that is, bandersnatches that are both snarks and boojums?

Solution to a Puzzle in Wonderland Forest

Why deny the Obvious Child?

Some people say "A lie's a lie's a lie"
But I say "Why?
"Why deny the obvious child?"
―Paul Simon, "The Obvious Child"

Ads and posters for the new movie Obvious Child include the following blurb:

"THE MOST WINNING ABORTION-THEMED ROM-COM EVER MADE."
-THE DISSOLVE

Unlike the usual "Blurb Watch" item, this is not misleadingly taken out of context. Rather, it raises a different question: Just how many abortion-themed romantic comedies have ever been made? If it's the only one ever made―and I can't think of another―then of course it's the most winning one, but also the least. In that case, what's the most winning needn't be particularly winning at all.

The author of the review did like the movie, but in a later interview with its director and star he commented about the blurb:

The Obvious Child poster quotes my Sundance coverage, where I called it the “most winning abortion-themed rom-com ever made.” I feel a little strange about that―it was a little facetious.

Just "a little"? This reminds me of the following capsule review of the Australian monster movie "Razorback": "Arguably the best movie ever made about a man-eating hog." Only arguably?

Update (8/5/2014): I just came across another example in Jordan Ellenberg's new book How Not to be Wrong―see below―where he writes that Tom Lehrer's song "Lobachevsky" is "surely the greatest comic musical number of all time about mathematical publishing." Surely, indeed. 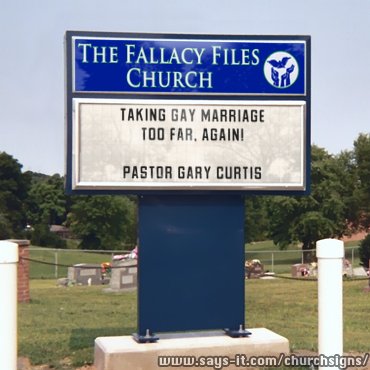 I laughed when they told me that gay marriage would lead to gay incestuous marriage.

…Los Angeles-based comedian and pit bull advocate Rebecca Corry estimates…as many [as] 5,000 people will assemble on the West Lawn of the U.S. Capitol, asking that government resources be dedicated to eradicating dog fighting and that laws restricting the ownership of pit bulls be abolished.

So, even the organizer of the march was predicting only 1/200th of a million people would show. Of course, "The 5,000 Pit Bull Owner March" just doesn't have the same ring to it. From the article, it appears that they didn't even march but "assembled". So, like the "Holy Roman Empire", there was no million, pit bulls, or march in "The Million Pit Bull March".

What's the next Million X March? The Million Little Green Man March? The Million Bigfeet March? Why not "The Billion Bigfeet March", anyway? As far as I know, none of these marches managed to get anywhere near the million mark, so why not take propaganda inflation into account? After all, the Million Man March, which seems to have been the first "million" march, was almost twenty years ago, so we should at least be up to the ten-million mark by now. Even that march didn't live up to its hyped name, since the U.S. Park Police estimated the crowd as less than a half-million at most. So, given that the names of these marches are not constrained by the actual numbers of marchers, what's to stop some group from having a "Billion X March"? 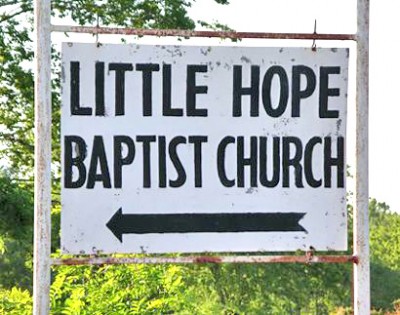 Q: Take a scenario where a religious leader makes a statement/claim that is subsequently scientifically verifiable as not true, but in his religion there are other statements/claims that might or might not be true, but because of at least one falsehood the whole religion is then dismissed as phoney. Is rejecting the whole because of one false occurrence a fallacy, and if so, what is the name of the fallacy? It amazes me that purveyors of new religions/cults include "physical type" false claims as science invariably will refute them.―John Addicott

A: There is a mistake sometimes called the "all-or-nothing fallacy", which is a type of black-or-white fallacy―see the Fallacy, below. The black-or-white fallacy attempts to force you to choose between two alternatives when other alternatives are available; the all-or-nothing fallacy specifically tries to force you to accept or reject something as a whole when there is the additional alternative of accepting part and rejecting part.

I suspect that some religions that demand their adherents swallow doctrines whole do so because they claim to be divinely inspired. God is usually conceived as infallible, and if the scriptures or prophet of a religion are claimed to speak for God then they should also be infallible. Logically, if the scriptures of a given religion contain a false claim, that wouldn't imply that every claim they make is incorrect. However, it would entail that they are not infallible, and therefore not divinely inspired.

Now, those who recognize that a given religion contains errors, and therefore is not infallible, should not swing to the opposite extreme of rejecting every claim it makes, which would be another application of the all-or-nothing fallacy. The fact that a religion is fallible means that some of its claims are false, not that they all are.

As to why someone starting a new religion would make easily-refutable empirical claims, your guess is as good as mine.

Resource: A Philosopher's Fallacy: "All or Nothing", 10/1/2006. This is actually a different fallacy under the same name as the one discussed above. I point to it just to make it clear that it's not the same thing.

Every so often I post a "Blurb Watch" entry as an example of how quotes taken out of context can be misleading. Of course, not a lot is at stake with contextomies in movie ad blurbs―at worst, you might spend ten dollars and waste a couple of hours watching a bad movie―but here's a more serious one from the headline of a recent Huffington Post story:

Nasa: Strange Markings Across The Globe 'Might Have Been Made By Aliens'

In true tabloid fashion, the article itself doesn't quite live up to its own headline―in fact, it pretty much goes on to debunk it―but there were some other articles that took it seriously.

Where did they get the quote attributed to NASA that prehistoric rock carvings "might have been made by aliens"? Here's a passage from another article on the same subject:

…William Edmondson from the University of Birmingham considers the possibility that rock art on Earth is of extraterrestrial origin. ‘We can say little, if anything, about what these patterns signify, why they were cut into rocks, or who created them,’ he writes. ‘For all intents and purposes, they might have been made by aliens.’

This whole story seems to have been concocted from this one sentence taken out of context. I don't know where or how it got started, but it's difficult to see how it could be an innocent mistake. No one reading the quote in context is likely to misunderstand it:

Consider again, therefore, the desirability of establishing symbolic/linguistic communication with ETI [ExtraTerrestrial Intelligence]. It is helpful to review some parallels from human existence that pose problems for us today. One of these is “rock art,” which consists of patterns or shapes cut into rock many thousands of years ago. … We can say little, if anything, about what these patterns signify, why they were cut into rocks, or who created them. For all intents and purposes, they might have been made by aliens. Unless we find a readable exegesis of them produced at the time they were made, we will never be able to say with certainty what the patterns mean.

This is from a book put out by NASA concerning the prospects and difficulties of communication with ETIs, should there turn out to be any. The author, William Edmondson, rightly emphasizes the difficulties of deciphering even human-made artifacts, let alone those made by intelligences from another planet and a different evolutionary history. But don't take my word for it: you can read the chapter for yourself―see Source 2, below.

Fallacy: Quoting Out of Context

New Book: How Not to be Wrong

In more book news, mathematician Jordan Ellenberg's long-awaited―at least, I've been waiting for it for so long I forgot about it―How Not to be Wrong: The Power of Mathematical Thinking is finally available. Judging by Amazon's "Look Inside!" feature, Ellenberg discusses some issues that we've encountered here, at least in passing, such as the voting paradox, straight-line extrapolation, regression to the mean, and Bayes' theorem.

Update (6/13/2014): Ellenberg has written a series of posts for Slate magazine based on his book and dealing with several subjects discussed, at least in passing, in these webpages. Check 'em out.

In the Mail: Humbug! (Second Edition)

Humbug!, a book by Theo Clark and his late father Jef, is out in a second edition. I reviewed the first edition several years ago―see the Resource, below. Unfortunately for us old-fashioned folks who still think of a book as a thing made out of paper, it seems to be available only as an e-book. However, it's hard to beat for sheer entertainment value, and the price is certainly right.

Solution to a Puzzle in Wonderland Forest: 3%