When More is Less & Who are the Experts?

The first article is by Gary Smith, the author of Standard Deviations, a book I've reviewed and recommend―see the Book Shelf page in the Main Menu to your left.

Disclaimer: I don't necessarily agree with everything in these articles, but I think they're worth reading as a whole. In abridging them, I may have changed the paragraphing and rearranged the order of the excerpts in order to emphasize points.

Inflation in America increased to 8.6% last month, a level that we haven't experienced for forty years. An important aspect of that inflation is the price of gasoline, which has risen at a rate much higher than the overall rate of inflation, increasing by nearly 50% over the last year1. You don't need the news media to tell you that the cost of gasoline has gone up a lot this year: just fill up your gas tank and you'll be painfully aware of it. Nonetheless, the news media keep referring to "record" or "record-high" gasoline prices2. In what sense is the price a "record"?

The claim that gas prices are setting new records is based on an average of prices nationwide compiled by the American Automobile Association (AAA). According to the AAA, the current national average price for a gallon of regular unleaded gasoline is $4.903. The "record high" was actually set on the 14th of this month at $5.016, so it's not now at a record-setting price, but only about a dime away.

What the news media don't usually mention is that AAA's average measures nominal gas prices, that is, simply the price on the pump unadjusted for inflation. Inflation is money losing value over time―which it's been doing unusually fast for the last several months―so that a dollar today is not worth what it was yesterday. A dollar this year will buy less gas than it would have last year, let alone ten, fifty, or one-hundred years ago.

Given inflation, comparing prices from many years apart is comparing apples to oranges or, for a less hackneyed and fruity analogy, it's like comparing prices in American dollars with prices in Canadian dollars without taking the exchange rate into consideration. "The past is a foreign country", as L. P. Hartley wrote4. So, to compare today's prices to those many years ago, you should adjust for inflation5.

Adjusting for inflation, the previous record was set in 2008, when prices averaged $4.116, which is $5.49 in today's dollars7. Inflation is running so high currently that it's entirely possible that we'll see inflation-adjusted prices exceed $5.49 in the near future, which would be a real as opposed to a merely nominal record price.

How to Get a Correction or Retraction in Ten Easy Steps

If, in the course of amateur fact-checking, you discover a factual error in a publication, what should you do then? You've received the benefit of not being misled by the error, but what about other readers or viewers who will not make the effort to check the mistaken claim? My suggestion is that you request a correction or retraction from the source that made the mistake, so that unwary people will not be misinformed.

A retraction is more drastic than a correction, and you are unlikely to get one for a single mistake unless it undermines the thesis of the article. In a retraction, the entire article will be removed, with perhaps a note replacing it that explains the retraction. Articles are most likely to be retracted for extensive plagiarism or fabricated information rather than easily correctable errors.

The combination of a lock is three digits long. Here are some incorrect combinations:

Can you determine the correct combination from the above clues?

WARNING: May cause brain-teasing.

A report in the The New York Times from fifty years ago about a water main break contained the following sentence: "A portable toilet unit on the construction cite also fell into the hole in the street.1" The toilet, of course, was on a construction site.

"Cite" is a verb, most commonly occurring in scholarly writing, which means to point to a source of supposed evidence for a claim or a quote2. In this weblog, I often cite sources for the information and quotes that I write about.

In contrast, "site" is usually a noun meaning "place", as in "web site" or "construction site"3. Given that the two words are pronounced identically, they are easy to confuse. Oddly, only two of the books I usually check, and sometimes cite, warn against such confusion4, though it seems to be a common error. In my experience, the most common mistake is to misspell "cite" as "site", though the confusion obviously can go in the opposite direction, witness the Times example.

Since "cite" is a verb and "site" is usually a noun, it's possible that a grammar checking program will catch confusion of one for the other. However, "site" can also be used as a verb meaning "to place", which means that a grammar checker may not catch it. My old copy of Microsoft's Word program flagged "cite" in the above example, and one online program automatically changed it to "site", though another did not. So, I would suggest that you test whatever program you usually use to see whether it would catch this mistake. If not, you can either upgrade your program or add this distinction to your mental software.

The Signal in the Noise 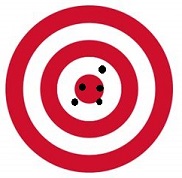 Quote: "To understand error in judgment, we must understand both bias and noise. Sometimes…noise is the more important problem. But in public conversations about human error and in organizations all over the world, noise is rarely recognized. Bias is the star of the show. Noise is a bit player, usually offstage. The topic of bias has been discussed in thousands of scientific articles and dozens of popular books, few of which even mention the issue of noise. This book is our attempt to redress the balance."1 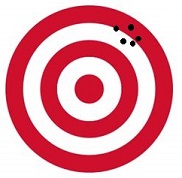 Comment: I was put off this book for several months by the title. While it's obvious that it's not a book about "noise" in the everyday sense of the word, it's not clear what it is about. There is a technical meaning of "noise" from information theory2, which is usually contrasted with "signal". Initially, based on the title, that's what I thought the book must be about, but at least two of the authors did not seem to be connected to information theory.

The phenomenon discussed in this book seems not to be "noise" in the information theory sense. "Noise", in that sense, refers to interference in a message, that is, something from outside that corrupts the message. For instance, static on a telephone line is "noise", and so is literal noise when you are trying to hold a conversation in a loud, crowded room. The message is the "signal", and "noise" is anything that interferes with or corrupts the signal. 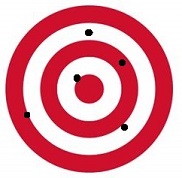 In the Introduction, the authors use diagrams to explain what they mean by "noise". Suppose that we're shooting a gun at a target; the first target, shown to the above right, is what we were aiming at, that is, to have all of the bullet holes grouped as closely together as we can get them in or near the bull's-eye.

In contrast, the second target to the above right shows that we have consistently missed the bull's-eye, though at least the holes are close together.

In the third target, above right, the holes are at least centered on the target, but they are widely spaced with only one close to the bull's-eye. 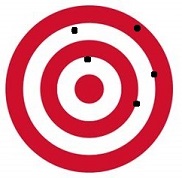 Finally, the fourth and last target, right, is the worst performance. The holes are not centered on the bull's-eye and are widely dispersed.

Interestingly, I recently purchased a book published ten years ago that uses the same target analogy:

The only thing missing from this description is the last target, in which the shooting is both inaccurate and imprecise.

In contrast to "accuracy" and "precision", the New Book's terms are negative, that is, they call inaccuracy "bias" and imprecision "noisiness". So, in those terms, the first and third diagrams show unbiased shooting, and the third and fourth are noisy. The first diagram has unbiased shooting with little noise, the second is biased but not noisy; the third is unbiased but noisy; and the last is both biased and noisy.

As indicated by the title and the Quote from the Introduction, above, the book is concerned with noise rather than bias, that is, with imprecision instead of inaccuracy.

Subtitle: A Flaw in Human Judgment

Comment: How is noise a "flaw" in human judgment? Noise has multiple causes, many of which come from outside of us. I could see calling it a "problem" for human judgment, but calling it a "flaw" makes it sound as though it is a mistake that comes from within. I guess I'll see whether the authors make good on the subtitle, or perhaps it was foisted on them by the publisher.

Comment: Kahneman is, of course, one half of the team of Kahneman & Tversky, famous for its work on cognitive biases. I'm unfamiliar with the second author. Cass Sunstein is the co-author, among other works, of Nudge, which I was highly critical of shortly after it came out almost fifteen years ago4. That book was about trying to exploit human biases for allegedly paternalistic reasons, and I hope this book is not about trying to manipulate people in order to reduce noise―see the General Comment, below.

Summary: According to the Introduction5, the book is divided into six parts on the following topics:

The Blurbs: The book is favorably blurbed by Robert Cialdini, author of Influence; Annie Duke, author of Thinking in Bets; Jonathan Haidt; freakonomist Steven Levitt; and the aforementioned Philip Tetlock.

Comment: This book is from last year, so it's not brand new, but I'm just getting around to reading it for reasons explained in the first Comment, above.

General Comment: Keeping in mind that I've read only the Introduction so far, my only misgiving about this book is that it appears to emphasize precision over accuracy, and I don't think that noise reduction should be an end in itself. Certainly, if we find ourselves in the situation represented in the third target, we would like to reduce the noise so that we get closer to the first target. However, suppose that the situation we find ourselves in resembles the fourth target, where there is both bias and noise, which is the most common situation. Why should we want to go from the last target to the second one, that is, reducing noise without improving accuracy?

The situation illustrated by the second target may actually be a worse one than the last target in that the precision of the shooting may give a false impression of accuracy. As the authors point out7, if we look at the backs of the targets we can't tell the difference between the first and second, which is often the situation we're in since we don't know exactly where the bull's-eye is.

In particular, I'm skeptical about the value of a program to reduce the noise in social and political judgments, since this may result in a misleading conformity. The easiest way to reduce imprecision in judgment is to compel people to conform through social pressure such as shunning and threats to one's livelihood or even life. Such pressure can create a factitious "consensus", such as that about the lab leak hypothesis or Hunter Biden's laptop.

These are just preliminary questions and doubts that occurred to me as I read the Introduction and, hopefully, the book will address and answer them adequately.

Disclaimer: I haven't finished reading this book yet, so can't review or recommend it. However, its topic interests me, and may also interest Fallacy Files readers.