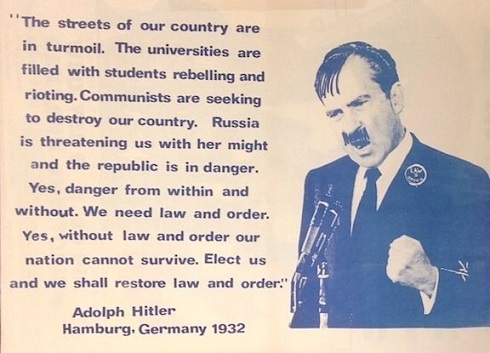 I was recently reading the book Age of Propaganda1 by Pratkanis and Aronson, when I came upon the following passage in the chapter entitled "The Fear Appeal":

…[I]n 1932, Adolf Hitler inspired his fellow countrymen and women with the words:

The streets of our country are in turmoil. The universities are filled with students rebelling and rioting. Communists are seeking to destroy our country. Russia is threatening us with her might, and the Republic is in danger. Yes―danger from within and without. We need law and order! Without it our nation cannot survive.

This seemed vaguely familiar to me because the same quote appears in a scene from a movie I had seen, Billy Jack, which was released in 1971. In the scene3, a cute, eleven-year-old girl reads the quote to a town council meeting then asks who said it. When no one answers, an older girl leans in and says that it was Adolf Hitler in 1932. It's a rousing scene, with only one problem: it's not true. Hitler never said that.4

This is not a contextomy, nor is it a misattribution or mistranslation; rather, it was simply made up out of whole cloth and falsely attributed to Hitler. Not only that but it was known to be a bogus quote before Pratkanis and Aronson's book was published, for Boller and George had included it in their book of fake quotes first published in 19895.

It's not known who created this false quote, but an early appearance was in a column by Jerome Beatty, Jr. in Saturday Review magazine from 19696. According to John Lofton, who seems to have been the first to research the alleged quote:

A check with Beatty reveals that he got the quote from a monthly newsletter edited by Dixon Gayer, a professor of journalism at California State College at Long Beach. Gayer got the quote from a Professor Leroy Hardy in that school's Political Science Department who said that he had copied the quotation from the office door of Professor Larry Adams of the Political Science Department at the University of California at Santa Barbara. Professor Adams is unable to remember where he obtained the original quote.7

And so the trail goes cold in early '69.

Like the poster shown above, the purpose of the spurious quote was to tar Richard Nixon by associating him with Hitler. In 1968, Nixon ran for president and won on a platform of restoring law and order to a country in turmoil. In that awful year, there were political assassinations―MLK and RFK―riots in many cities, including Chicago during the Democratic convention, as well as on college campuses. So, even though we don't know who wrote the passage in question, we can be pretty sure that it was produced in '68, because it was at this time that the slogan "law and order" was popularized.

In other words, the phony quote is propaganda, and lying propaganda at that, at least in the case of whoever it was who wrote it. Yet, a book on propaganda treats it as if it were a genuine quote. What more could the propagandist ask than that his lie be accepted as true by the writers of textbooks on propaganda?

It's now nearly half-a-century since this faux quote was created, and almost as long since it was debunked. Yet some people continue to quote it as though it were for real, including some online quote sites. It's a zombie quote: it's dead, but it keeps coming back from the grave, and it wants to eat your brain. As Keyes writes:

Do we really want to know when we misquote? It's not always clear that we do. … This is understandable. … In many cases, we prefer blissful ignorance. Even quotations known to be apocryphal―Hitler on disorderly youth…―live on long after they've been debunked. … A good misquote never dies.8 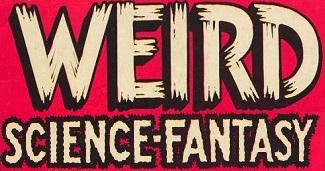 Check out the following newspaper headlines:

Why You Need to Ignore the Latest Misleading Study Glorifying Coffee3

The article under the first headline is short and egregiously credulous, while the second is longer and appropriately skeptical. Since the second is dated the day after the first, it could almost serve as its retraction4. The Observer's new slogan could be: "Two newspapers for the price of one!"

Here's a sort of critical reader's digest version of both articles, side by side so that you can compare and contrast their treatments of the studies:

Acknowledgment: The illustration is adapted from the cover of an old EC comic book.

The Puzzle of the Four Jacks

"The Four Jacks", as the police called them, was a gang of bank robbers, each of whom happened to have the first name "Jack". Their last names are, in alphabetical order: Clubb, Dimond, Hart, and Spayd*. However, according to police informant Eddie "the Snitch", there was a falling out between Jacks Clubb and Dimond that led to the break-up of the original gang.

"That's right," Eddie told Detective Davidson, "those two got into it and now they won't work together no more."

Now, another bank has been robbed, and eyewitnesses saw at least two masked robbers in the getaway car. According to Eddie, some of the Four Jacks are responsible for the crime, but he doesn't know who.

"Hart and Spayd are thick as thieves," Eddie informed Davidson, "they was cellmates in the pen, and you can bet that if either one of 'em was in on it the other was, too. But Spayd don't trust nobody, which is why he won't work with just one other guy, not even Hart. Clubb won't work alone with the two of 'em, 'cause he don't trust 'em. That's why he brought Dimond into the gang."

That's all that Eddie could tell Davidson. Assuming that what Eddie told him is correct, which if any of the four Jacks should Davidson arrest?

*The names have been changed to protect the innocent.

I haven't read this new book yet, so I can't recommend it. However, I am intrigued by the book's subtitle: "A Critical Thinker's Guide to Media Bias". That's something I could use.

The topic of media bias is a difficult one to discuss in an unbiased way as it's so partisan: the right cries: "Liberal media bias!" and the left responds: "What liberal media?1 Fox! Rush!" However, both sides are right: there is liberal and conservative media bias, but it depends upon the media outlet. The New York Times and MSNBC2 are biased towards the left and the Democratic Party, while The Washington Times and Fox News Channel2 are biased to the right and the Republicans. Any minimally sophisticated consumer of the news knows this.

The author of the book, Larry Atkins, is a more-than-minimally sophisticated consumer of the news3; in fact, he's a professor of journalism. Unsurprisingly, he's also a liberal:

In an effort to be completely transparent, I should note that I am a staunch4 liberal. … In this book, however, I am attempting to give a balanced, objective, and centrist presentation…. I acknowledge that my attempt at balance may not be perfect, but I will try my very best to both acknowledge and critique conservative and liberal advocates.5

Fair enough. It would be unfair to demand perfection.

Like a previous New Book author6, he retracts the book's title in the "Introduction":

Don't be fooled by the title of this book. This will not be a diatribe against the so-called liberal media. … The point of this book is to examine media bias on both ends of the political spectrum, whether liberal or conservative.5

Well, that's good. I'm not too interested in reading a diatribe, though they can have their uses. One topic of the book appears to be what Atkins calls "advocacy journalism", which he describes as follows:

Advocacy journalism…is a type of reporting in which the reporter gives an opinion or point of view and uses stories to advance an agenda. … Yet many people rely on advocacy journalism as their main source of news. Perhaps most importantly, advocacy journalism has a polarizing effect upon society, and I hope this book deepens readers' understanding of this polarization. The book will also explore aspects of media literacy and ways to navigate the echo chamber of modern media. (By "echo chamber", I am referring to the tendency for people to get news and opinions from sources that "echo," or reinforce, their own or similar viewpoints.)5

There's also a paradox facing the advocacy journalist: an advocate wants to influence people in a certain way, but the ability to do so is partially dependent on the trust that comes from being an honest journalist. I'm not the only one who doesn't trust "journalists", such as Michael Moore, who are willing to put their advocacy ahead of the truth. So, what should the advocate who is also a journalist do? Pretend not to be an advocate? Or be an honest journalist, instead?

These are a few of the questions I hope to see addressed in Atkins' book.

Solution to the Puzzle of the Four Jacks: Davidson should arrest Dimond, Hart, and Spayd.

There are sixteen subsets of the Four Jacks1, including the complete gang and the empty set2. We know from Eddie that the complete gang is no longer together, and we also know that someone from the gang is responsible for the robbery, so we can rule out the whole gang and the empty set. Four subsets of the gang consist of the four individual members of the original gang, but the eyewitness accounts indicate that there were at least two robbers, so we can rule out those four single-member subsets. That leaves ten possible subsets of the Four Jacks, using the obvious abbreviations: