The Fallacy Files is dependent on reader support to remain a free website. If you value it, you can help support it in three ways:

Thank you for your support! 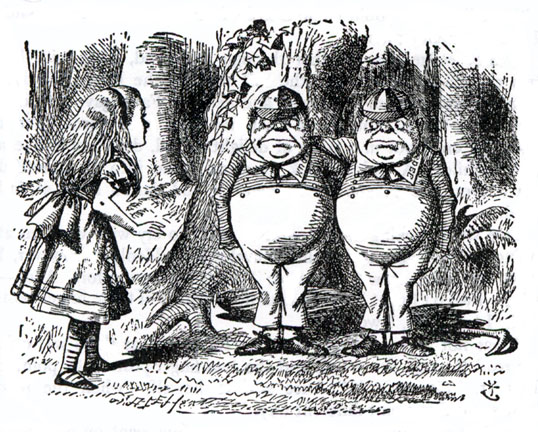 A Puzzle Through the Looking-Glass
and How Alice Solved It

In a clearing in the forest, Alice and the White Knight came upon the twins Tweedledum and Tweedledee. Alice recognized them from a picture book she had looked at, but she didn't know which was which. They looked exactly alike!

Alice curtsied. "How d'ye do," she said, "my name is Alice, and this is the White Knight."

"I s'pose you're wondering who we are", said the twin on the left. "I'm Tweedledee", he added, despite the fact that Alice at that moment noticed that his collar said "DUM" in big letters.

"Contrariwise, I'm Tweedledum", said the one on the right, whose collar read "DEE".

The White Knight leaned over and spoke softly in Alice's ear: "Don't trust them! At least one of them is lying. It's always that way! Sometimes both lie." The White Knight, of course, always told the truth, since he was a knight and not a knave!

"But I can tell from their collars which one each is", Alice replied.

"Oh, that!" the Knight laughed. "At night, when they go to bed, they both throw their clothes in one big pile. In the morning, they put on whatever comes to hand. So, their collars are just as likely wrong as right."

For a moment, Alice was completely at a loss how to address them, then she suddenly realized that she could figure out their names. Which twin did Alice address as "Tweedledee" and which as "Tweedledum"?

How Alice solved the puzzle

Prepare for a master's class in quoting out of context. It's easy enough to craft a favorable blurb out of a pan as long as you quote only single words, CAPITALIZE THEM, AND ADD AN EXCLAMATION POINT! What's hard is to quote longer passages from a negative review and make it sound positive. But what else can you do when the movie you have to blurb has an 8% Tomatometer rating, and a Metascore of 28 for "generally unfavorable reviews"? Here's how to do it:

A further tip-off that this movie was poorly received by reviewers is given by the other two blurbs in the ad, one of which was taken from a review in the Culver City Observer newspaper, and the other from a blog. When ads start quoting small town newspapers and blogs, you know that the major critics panned the movie.

Statistician David Hand has a new book out called The Improbability Principle: Why Coincidences, Miracles, and Rare Events Happen Every Day. Coincidences are important because they are the stuff of conspiracy theories and contribute to people's belief in psychic powers. People usually greatly underestimate the likelihood of such events―for an example, see Hand's discussion of the birthday paradox in Source 3, below. As a result, we often jump to causal conclusions based on chance occurrences. An example that I've discussed previously―see the Resources, below―is the argument that the so-called "fine-tuning" of the physical constants of the universe requires a causal explanation. I've no idea how Hand comes down on this issue, but I see from the index of the book―which you can see with Amazon's "Look Inside!" feature―that he discusses it, and I'm curious what he thinks. 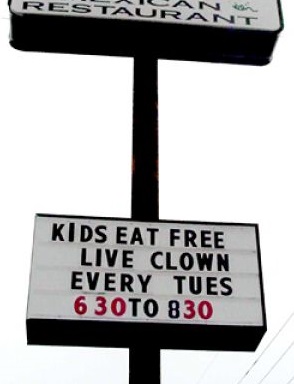 Bad News About the Good News

There's some good news and some bad news. The good news is found in the following headline from The New York Times:

Obesity Rate for Young Children Plummets 43% in a Decade

Unfortunately, as too often happens, the bad news is that the good news is wrong. The headline is from a report on a CDC study of obesity rates―see Source 4, below. The bad news comes from an article by Razib Khan in Slate―see Source 2, below, and read the whole thing, it's good!

There are two main problems with the headline and its accompanying article:

Now, if both lied, then the solution is obvious: each brother is the opposite of what he claimed to be. So, Alice correctly addressed the twin on the left as Tweedledum and the one on the right as Tweedledee.