In the Mail: Emotive Language in Argumentation

The latest book by the prolific and influential Douglas Walton, in collaboration with philosopher Fabrizio Macagno, arrived today. I haven't read it yet, of course, but it appears at first glance to concern the use of loaded language―that is, words and phrases that carry an emotional charge in addition to their literal meaning. A related topic addressed is persuasive definitions, which are designed not merely to explain the meaning of a word, but also to influence or express an attitude towards that meaning, often through the use of emotionally-charged language. Emotional language, of course, plays a large role in propaganda, but also in political discussion in general, so this is an important and poorly-understood topic. 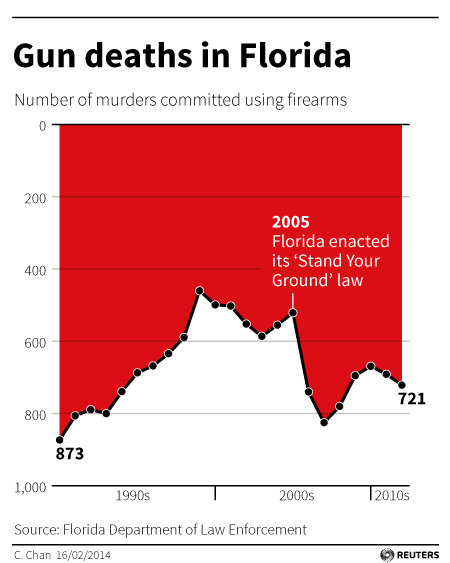 Charts & Graphs:
Where is my mind?

With your feet in the air
And your head on the ground,
Try this trick and spin it.
Your head will collapse
If there's nothing in it,
And then you'll ask yourself:
"Where is my mind?"
―Black Francis, "Where is My Mind?"

Can you tell what this chart is trying to say about gun deaths in Florida? What happened in 2005 after the so-called Stand Your Ground (SYG) law was passed?

Your first impression may well be that there was a sharp drop in deaths from guns after the law's passage, which seems a bit counter-intuitive. But take a second look at the graph, and this time do so while standing on your head. Or, at least look closely at the scale on the left side of the chart.

That's right: the chart is upside down! That is, the origin is at the top left corner, rather than at the bottom left corner as is usual. Now, I don't suppose there's a hard-and-fast rule against flipping a chart in this way, but it certainly is unusual. As a result, most people will read the chart as if it were right-side up, getting the exact opposite impression about what the chart shows than the actual numbers. In other words, rather than a decrease in gun deaths after the passage of the law, there was an increase.

This raises another problem with the graph: by marking the point where the SYG law was introduced, it's at least a boobytrap for post hoc reasoning―see the Fallacy, below. The reader is likely to look at the chart and conclude that whatever happened after the law was passed, whether an increase or decrease in gun deaths, was caused by the law. However, just because the number of gun deaths went up or down―or stayed the same, for that matter―after the passage of the law does not mean that the law had anything to do with it. At most, that fact might suggest the hypothesis that the law increased the number of gun deaths, but then the hypothesis would need to be tested before we were warranted in drawing such a conclusion. 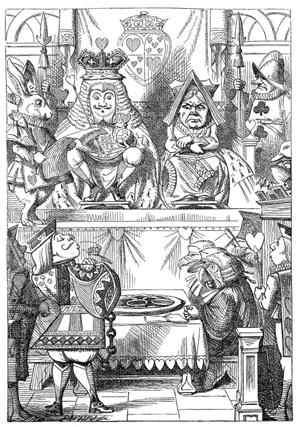 A Puzzle in Wonderland: Who Ate the Tarts?

We know who stole the tarts―it was the Knave of Hearts―but who ate them?

During the Knave's trial, the March Hare testified to the following five statements:

"That's no help!" Alice thought during the testimony. However, she was later able to figure out from the five statements who must have eaten the tarts. Assuming that the March Hare told the truth, can you determine who ate the tarts and who didn't?

Who ate the tarts

How to argue with a conspiracy theorist

If you must argue with a conspiracy theorist (CTist), Steven Novella has some good advice about how. Read the whole thing―see Source 2, below ―then I have a few comments and recommendations based on my own experience arguing with them. As a result of occasionally discussing what's wrong with conspiracy theories (CTs), I've had some email correspondence with their advocates, and much of what Novella writes rings true. For instance:

I…find them [CTists] to be the most consistent in their style of reasoning and argument. I do wonder, however, how much of this consistency is due to an underlying reasoning style and how much is culture. When I get the same fallacious argument over and over again, is that because they are all reading the same source material?

I suspect it is. For instance, one of my correspondents made many claims that have been around for several years, and been debunked for just about as long. Where else would someone have picked them up except by reading all the usual CTist suspects? Such claims don't seem to die despite repeated debunking.

However, this is a good way for the CTist to change the subject from his or her own implausible claims, and try to put the burden on you to prove something unprovable, namely, that conspiracies never happen. I was faced with this particular red herring in a Reader's Response to a previous discussion of CTs―see Resource 3, below. If you let the CTist get away with this misdirection, you'll find yourself playing defense. It's not up to you to disprove the CT, let alone to show that no such theories are true. Don't be suckered! The burden of proof is on the person defending the CT in question.

I also explained in that same entry why CTs are not simply theories about conspiracies. Here's how Novella makes the same point:

This is what I mean by calling CTs "pseudotheories": rather than being similar to scientific theories they are more akin to religious belief systems.

Another point that I've made in other contexts is that smart people can often believe foolish things―see, for instance, Resource 2, below. In fact, there appears to be nothing too silly for some smart person to believe. Here's what Novella has to say about the intelligence of CTists:

This is an important point. I make a distinction between intelligence and stupidity, on one hand, and wisdom and foolishness, on the other. One of the smartest people I've ever known was a CTist―thankfully, the CTizing didn't cross over into this person's work. However, as a result, this was also one of the most foolish people I've ever met.

In addition to that personal anecdote, the history of philosophy is filled with brilliant people who believed absurd theories―I won't name names, but I can if necessary! Thus, high intelligence can be accompanied by great foolishness. Thankfully, some highly intelligent people are also wise; and, of course, stupid people are usually foolish. That leaves the wise idiot: do such people exist outside of literature? They are familiar characters in fiction, such as Voltaire's naive but wise Candide, who is contrasted with the brilliant fool Dr. Pangloss. However, I've never met a Candide, so I'm doubtful whether such people exist, though I've known a few of Dr. Pangloss' modern descendants.

While CTists may be smart, they will treat you like a fool if you let them. Here's one tactic that Novella mentions:

[One CTist ploy] assumes that the skeptic has not done any research. This is a common ploy. Of course, I do advise that skeptics refrain from commenting definitively on topics with which they are not adequately familiar. But the response here is often a straw man.

Indeed. One of my CTist correspondents threw a bunch of claims at me that I had already heard and knew to have been debunked years previously. Not only that, but a few I had pointed out were false on this very weblog! So, it was not I who had not done my research. From a rhetorical point of view, this is a good way to lose friends and influence people in a bad way. As I told this CTist, if you can't be bothered to read what I've already written on the subject, I can't be bothered to read your email. So, if CTists get up on their high horses about how much research they've done, kick 'em off!

Another issue that Novella discusses is the use by CTists of what philosopher Stephen Law calls "the blunderbuss", which involves throwing out large amounts of supposed "evidence" for the CT and demanding that each piece be explained away. Novella correctly notes that many scientific theories are not based on a single piece, or even a small number of pieces, of evidence, so that it might not be reasonable to reject this demand. However, I think he misses an important point, or at least doesn't make it forcefully enough: the individual pieces of evidence have to withstand scrutiny, which they seldom do in CTs.

For instance, while I haven't looked carefully at every piece of supposed evidence that 9/11 CTists cite, the few I have simply evaporated under close examination. After awhile, based on such a sample, it's legitimate to generalize that all such evidence will meet the same fate. Also, it becomes evident that CTists are either ignorant or unscrupulous, as they insist on continually bringing up easily debunked "evidence". So, it turns out that the blunderbuss is unloaded.

Here's one last quote from Novella:

…[I]f you are working backwards to a desired conclusion, and have loose criteria for what counts as evidence…you can build a case for literally any theory, no matter how wacky or implausible.

This is the point that I've tried to make previously about the lowering of evidential standards involved in CTs. There is some psychological evidence that CTists are prone to believing multiple CTs, even inconsistent ones! But if you lower the flood gates, don't be surprised if you get a flood.

I don't necessarily recommend arguing with CTists, who are often completely closed-minded about their pet CTs, but if you must do so come prepared. You probably won't be able to change their minds, but at least you shouldn't get pulled down into the rabbit hole after them. If you keep the above points in mind and follow the suggestions, hopefully that will be less likely.

To sum up: the Knave and the Hatter ate tarts, but the Duchess, White Rabbit, and Dormouse did not.