On this day of thanks, I am thankful for all of you who have supported this website over the last year, whether by visiting the site's advertisers, buying something through the links to Amazon, or donating directly via PayPal. Thank you!

I have a couple of comments about William Saletan's interesting article in Slate on psychological research into conspiracy theorizing:

Reader Response (12/6/2013): A reader who would rather remain nameless writes:

There is a confirmation bias on the part of all parties. Usually this is put in terms of conspiracy theorist or not conspiracy theorist. This type of either/or reasoning is fallacious. Does this definition suit you? Conspiracy: two or more parties coming together to the detriment of a third party. Conspiracies happen quite often. The term conspiracy theorist has become a sort of ad hominem that allows people to ignore certain lines of logic. (Guilt by association?)

I have a few points to make in response. First off, a couple of minor ones:

In conclusion, I'm reminded of the following passage from Plato's Republic:

…[Y]oungsters, as you may have observed, when they first get the taste in their mouths, argue for amusement, and are always contradicting and refuting others in imitation of those who refute them; like puppy-dogs, they rejoice in pulling and tearing at all who come near them. … And when they have made many conquests and received defeats at the hands of many, they violently and speedily get into a way of not believing anything which they believed before, and hence, not only they, but philosophy and all that relates to it is apt to have a bad name with the rest of the world. 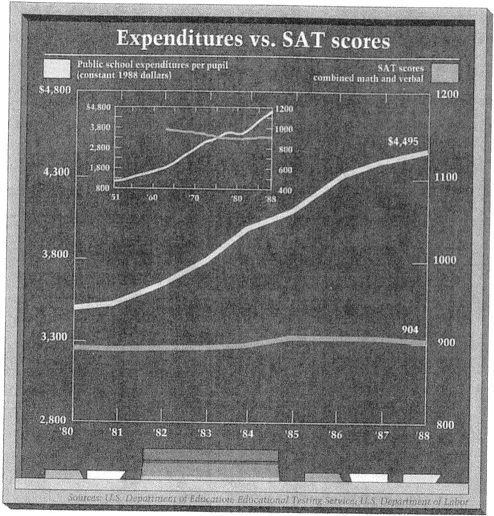 The sin of a "double Y-axis graph" is mortal. If there is a just God, I am sure that there is a special place in the inferno reserved for its perpetrators.―Howard Wainer (P. 91)

A double-Y―or dual-Y―axis graph is a Cartesian graph, that is, a graph with X and Y axes. Typically, such graphs are rectangular with the bottom of the graph representing the X-axis―or abscissa―and the left-hand side representing the Y-axis―or ordinate. A double-Y axis is, of course, such a graph with two Y-axes, where the second Y-axis is represented by the right side of the rectangle.

If you think about it for a moment, a Cartesian graph with two Y-axes is impossible! However, a double-Y axis graph is, in effect, two Cartesian graphs with a common X-axis laid one on top of the other. Despite what Wainer, author of Visual Revelations, says in the quote above―I just thought it was funny―there isn't anything necessarily wrong with YY graphs. Even Wainer goes on, at the end of the chapter where he discusses them to write:

Is there any use of the double Y-axis format that is reasonable? A very restricted "yes." (P. 94)

Anytime you want to compare two Cartesian graphs that share an X-axis, it might make sense to combine them into a single YY graph. However, the danger of such graphs is that it's very easy to manipulate the two Y-axis scales to create a misleading impression.

Consider the example above, which comes from Wainer's book (p. 93), though it originally appeared in Forbes magazine on May 14th, 1990. Ignoring the small inset graph, the main graph compares school spending with Scholastic Aptitude Test (SAT) scores over the course of the nine years from 1980 to 1988. Just glancing at it, you'd get the impression that spending went up but SAT scores remained relatively flat, which may be just the impression that the chart-maker intended. The left-hand Y-axis representing per pupil spending starts at $2,800 and goes to $4,800; whereas the right-hand Y-axis for combined math and verbal scores on the SAT starts at 800 and extends to 1200, though a low of 400 and a high of 1600 total points are possible.

So, this chart is two gee-whiz line graphs in one! (See the first entry in the series, below, if you don't know what I'm talking about.) The left-hand scale seems to have been chosen to exaggerate the degree to which spending has risen, so that the rise takes up about half of the vertical space of the graph. In contrast, the right-hand scale flattens out the rise in SAT scores by including a larger part of the scale. The increase in spending over nine years is about $1,000 per pupil, while the scores increased around fourteen points, though it's hard to tell exactly. Depending on how much each scale is squeezed or stretched, it would be possible to make both lines almost parallel, or even to switch their positions, so that it would appear that spending barely increased while the scores soared.

This is one problem with YY graphs: the impression that they create is easily manipulated by placing a finger on the scales. So, when confronted with a graph with two Y-axes, carefully examine each scale: has one been stretched in order to create a "gee-whiz" reaction, or squeezed to play down a change?

Another problem is that simply graphing two variables on the same graph may create the impression of a causal relationship, especially if the Y-axes have been carefully tweaked to make the lines parallel. So, always ask yourself whether such a causal relationship is plausible and, if so, which direction does it go? Is it possible that both variables are affected by a third one that isn't graphed?

If you ask and can answer these questions, you should avoid being deceived by a YY-graph.

Previous entries in this series:

While we have seen the apparent death of Communism, ways of thinking that were either born under Communism or strengthened by Communism still govern our lives. Not all of them are as immediately evident as a legacy of Communism as political correctness. The first point: language. It is not a new thought that Communism debased language and, with language, thought. There is a Communist jargon recognizable after a single sentence. Few people in Europe have not joked in their time about ôconcrete steps,ö ôcontradictions,ö ôthe interpenetration of opposites,ö and the rest. … Even five, six years ago, Izvestia, Pravda and a thousand other Communist papers were written in a language that seemed designed to fill up as much space as possible without actually saying anything. Because, of course, it was dangerous to take up positions that might have to be defended. Now all these newspapers have rediscovered the use of language. But the heritage of dead and empty language these days is to be found in academia…. Yes, I know the obfuscations of academia did not begin with Communism―as Swift, for one, tells us―but the pedantries and verbosity of Communism had their roots in German academia. And now that has become a kind of mildew blighting the whole world. … The phrase ôpolitical correctnessö was born as Communism was collapsing. I do not think this was chance. I am not suggesting that the torch of Communism has been handed on to the political correctors. I am suggesting that habits of mind have been absorbed, often without knowing it. … I am sure that millions of people, the rug of Communism pulled out from under them, are searching frantically, and perhaps not even knowing it, for another dogma.―Doris Lessing (6/26/1992) 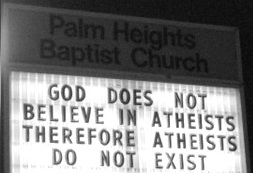 Here are some headlines from the end of last month:

How Modal Logic Proved G÷del was Right, and God Exists

Why didn't this story get more attention? If true, isn't this the biggest news in human history, or at least the last month? Some other headlines for the same story put the word "prove" in quotation marks, or otherwise suggest some doubt about it, but I purposely chose those that present it as an established fact.

Kurt Gödel was a famous 20th-century logician, and the proof in question comes from his unpublished notebooks. Gödel died in 1978, but the proof became public in 1970 through another famous logician, Dana Scott, who knew Gödel. The argument is one of a class of similar ones called "ontological" by philosophers, and in my experience they are more confusing than convincing. An ontological argument for the existence of God is rather like a magician pulling a rabbit out of a hat: it's surprising that a rabbit comes out of the hat, and you may not know exactly how the rabbit got in there, but you don't really believe that it just appeared out of thin air. Similarly, it's surprising when at the end of an ontological argument God pops out, but you don't really believe it. Somehow, just as the magician manages to slip a rabbit into the hat when you're not looking, the philosopher is able to slip the existence of God into the premisses.

The third headline above, as well as other articles, mentions that the proof uses modal logic, but this doesn't mean that the existence of a god is a theorem of modal logic. It's not. Modal logic, in this case, refers to the logic of the related notions of necessity and possibility―there are other modalities, see the entry for "Modal Fallacy" in the drop-down menu to your left for more on modalities and their logic. The conclusion of Gödel's proof is that a god necessarily exists―which, of course, entails that a god exists―and it's this use of the notion of necessity that requires modal logic. Rather than being a theorem in some system of modal logic, the conclusion is a theorem in an axiom system created by Gödel, but really it's just an argument with eight premisses.

Some of the news articles and their headlines seem to suggest that it's been proven for the first time, but I don't think that there's ever been much doubt that the proof is correct. It's challenging, but not so hard that it requires a computer to do. Gödel's much more famous and important incompleteness theorem is far more difficult!

Instead, the authors of the two-page article upon which all of the news stories are based (see Source 1, below) were reporting an achievement in automated theorem proving, not the first proof of the existence of a god. Apparently, proof of the argument was a difficult challenge for such programs, presumably because of the use of modalities but perhaps also second-order quantifiers―that is, quantifiers that range over properties instead of individuals―which also play a role in the proof.

So, what exactly did Gödel prove? The proposition in question really was proven, so the headlines are right to say so. However, it was proven from the premisses given by Gödel, and it's in the interpretation of those premisses that the problem of what to make of it all lies. In fact, since all five of the "axioms" make use of an undefined predicate, it's not even clear what they mean. Calling it a proof of the existence of God is one interpretation, and it was presumably Gödel's interpretation, but it's not the only possible interpretation, nor is it forced on the skeptic. The premisses are not at all like the axioms of logic or mathematics, that is, they're not self-evidently true nor does denying one lead to self-contradiction. All that anyone who doubts the existence of a god needs to do is reject one or more of the axioms.