"I have a right to my opinion."

Reader Patricia Heil asks: "How many times have you heard this when somebody reaches the end of their resources in a debate?" Many times! Whether the claim to such a right commits a fallacy depends upon the context in which it occurs, and there may be no one fallacy that every instance commits, nor in some cases any fallacy at all.

Daniel Patrick Moynihan is often credited with having said: "Everyone has a right to his own opinion, but no one has a right to his own facts." If the subject in dispute is a factual matter, rather than a matter of opinion then, according to the maxim, the person may not have a right to an opinion. However, if it is a matter of opinion, there are still a couple of fallacies that may be committed:

On this day of thanks, I want to acknowledge all of those who have supported The Fallacy Files since I last thanked you! A special thanks to those who have contributed by PayPal in recent months; this is the most direct way of supporting the site financially. Thanks also to everyone who went out of their way to click on a Google ad, or purchased something from Amazon through one of the site's links. Your support is appreciated!

How Not to Do a "Back of the Envelope" Calculation

Note: This is a follow-up to the entry below titled "BOTEC" (scroll down if you want to read it first), but I think it's interesting enough in its own right to merit a separate entry.

Thanks to the miracle of the internet, I was able to find the study that appears to be the origin of the "100,000 beer commercials by 18" claim (see the Source, below). The study was done for the American Automobile Association's Foundation for Traffic Safety, and apparently published by them as a booklet rather than appearing in a peer-reviewed journal.

Now, the AAA are "good guys" and traffic safety is a good cause―I, for one, am willing to go on record as favoring traffic safety―but it is an interest group, and the study is thus advocacy research. This is not to say that it mightn't be completely correct, but it isn't unbiased and should be treated with caution.

It's not obvious where the study's authors got the 100,000 number, and there are no references to a source. Rather than being based on an outside source, the number appears to be estimated from information contained within the study itself, though the authors don't explain exactly how they came up with it.

The number appears to be the result of a five-step process:

So what went wrong here? Each step on its own is perhaps defensible, but the end result is unbelievable. I think what happened is that each step of the estimate went slightly astray, but they all strayed in the same direction, namely, to exaggerate the number of beer commercials seen by children. At the end of the five steps, these small deviations add up to a whopping deviation.

Despite the authors' claim, none of the estimates made is "conservative". When there is uncertainty about a quantity, a conservative estimate assumes a value that tends to be on the low side, so that we can have confidence that the true value is at least as much as the estimate.

In contrast, at each step the study's authors have made high-end estimates that support their view that beer commercials are a major influence upon children and, therefore, should be banned or regulated. What would a genuinely conservative estimate look like? Like this:

Now, this may be on the low side, but that's the point of a conservative estimate. As a result, we can say with some confidence that children almost certainly see an average of one beer commercial a day, and probably more than that. That, I can believe.

As a final note, the study's main author, Neil Postman, later claimed that "between the ages of three and eighteen, the average American youngster will see about 500,000 television commercials…". There is no citation for this claim, nor explanation of why it is half the previous estimate. Did commercial viewership decline by half in the intervening years, or did Postman realize that the original estimate was twice what it should be? I think this shows what wild guesses these numbers are.

If I may quibble, I think your estimate of minutes of commercial advertisement per hour is too low. Current half-hour programs actually run 22 minutes, leaving about 16 minute/hour for commercials. The seventies series "Happy Days" ran about 24 minutes (12 commercial minutes per hour); "The Wonder Years" (1988) ran 48 minutes (also 12). While this doesn't make up for all the other rounding up, it would still boost your BOTEC considerably. Granted, you are making a conservative estimate.

I stand corrected on the amount of commercial time per hour. However, the real unknown―at least, unknown to me―is the ratio of commercial-filled TV viewing to commercial-free viewing among children. The study's assumption of nearly eleven minutes of commercial viewing time per hour would be conservative if all that children watched was channels that play commercials. But young kids in 1987 watched Sesame Street, and older ones watched movies on HBO or videocassettes. When I made the conservative estimate, I assumed ten minutes of commercials per hour on those stations that showed commercials. However, I also assumed that half of viewing was commercial-free, so that the average amount of time per hour spent watching commercials was only five minutes. The only reason that I assumed a fifty-fifty split is that I have no idea what the real ratio is. Unfortunately, I forgot to explain this part of the estimate above.

Note: I linked to this story over a year ago (see the Source, below) under the headline "Indonesia police storm Java house". Since then, the headline was changed to that above, though I doubt that the change had anything to do with my poking fun at the original headline. My guess is that when the story was first filed the police had just stormed the house, and only later was it known that a suspect had been killed, so the story and headline were updated to reflect this fact. Anyway, maybe I have a twisted sense of humor, but I found both headlines amusing. 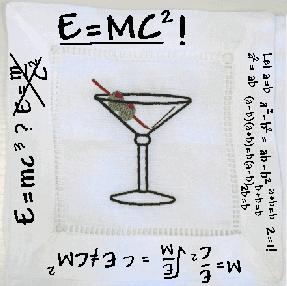 Get out your cocktail napkin because it's time once again to play "Back of the Envelope Calculation" (BOTEC). This is the game where we test the numbers that we read in the media for plausibility, instead of just swallowing whole what we are fed by interest groups.

The AMA long has focused on how alcohol advertising affects young people, who, studies show, typically will see 100,000 beer commercials before reaching age 18.

Is that a plausible number? Grab some junk mail and a pencil and find out!

See the Back of the Envelope

Tell Me a Story

John Allen Paulos has an article in the New York Times on the relationship between stories and statistics. He discusses the conjunction fallacy, the Linda problem, and the intensional/extensional distinction, though not the intensional fallacy. Read the whole thing, of course, but there's something I want to add.

Near the beginning, Paulos mentions the "man bites dog" nature of a story: "an event distinctive enough to merit retelling". Dogs bite men all the time, but a man biting a dog is unusual, and it's this distinctiveness that makes it a good story. However, a distinctive event is an improbable event. Also, in discussing the conjunction fallacy, Paulos says that details tend to enhance a story's credibility yet simultaneously lower its likelihood, that is, they make it "more plausible, but less probable".

Thus, the most convincing stories are often the least likely to be true. A car crash is a dog-bites-man story, while a plane crash is a man biting a dog, so people come to fear plane crashes more than car crashes partly because the former are less probable than the latter. Then they go through their lives most afraid of the things least likely to harm them.

No wonder they're extinct.

While many critics rate movies on a star system, The San Francisco Chronicle uses a series of pictures of a little man with a derby hat sitting in a chair. The first picture just shows an empty chair, indicating that the little man has fled the theater, while the last has him leaping from the chair in wild applause, his hat falling on the floor (see the picture).

If this rating system were to be translated into stars, it would have to be a five-star system―unless, of course, it was a four-star scale with the possibility of giving a rating of zero stars. The Chronicle gives the new movie Conviction the fourth picture in the series, also known as "Polite Applause", but an ad for the movie translates this into four stars.

So, this is a roundabout version of the old "four star" trick that we've seen before. Since four stars is frequently the highest possible rating, it's misleading to simply cite a review as "four stars" when more stars were possible. Instead, the ad writers could say "four stars out of five", if they wanted to be totally honest. But when have they ever wanted that?

The Back of the Envelope:

Is it plausible that kids see 100,000 beer commercials before they're eighteen? Who knows? 100,000 sounds like a lot, but is it too many to believe? How can we test such a claim for plausibility? Here's one approach, and by no means the only possible one, as you may have taken a different route:

Here are some lessons to take away from this exercise: