Here's another logic puzzle based on an actual LSAT "logic game":

The philosophy department at Midwestern State University has five professors: Dr. Arnold, Dr. Boole, Dr. Carroll, Dr. DeMorgan, and Dr. Euler. All of the professors would like to attend the upcoming conference of the Midwestern States Philosophical Association. However, there are some constraints:

Will Dr. Euler go to the conference? 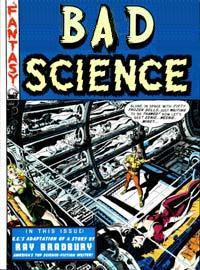 Lying is knowingly telling a falsehood with intent to deceive. This is why so many accusations of lying in politics are hyperbole, at the very least, since they are often based on no more than the supposed liar saying something false. It's impossible to read minds, so it's difficult to establish either the knowledge or the intent aspects of a lie. For this reason, when politicians or pundits begin yelling "liar, liar!", a good rule of thumb is that the "liar" simply said something the accusers believe to be false. So, in the political doublespeak dictionary, the entry would read:

Liar (n.) = One who says something that the accuser believes to be false.

This is what makes the following exchange from the recent Clinton-Obama debate so remarkable:

MR. STEPHANOPOULOS: Senator Clinton, we…did a poll today, and there are…questions about you raised in this poll. About six in 10 voters that we talked to say they don't believe you're honest and trustworthy. And we also asked a lot of Pennsylvania voters for questions they had. A lot of them raised this honesty issue and your comments about being under sniper fire in Bosnia. Here's Tom Rooney from Pittsburgh.

Q Senator, I was in your court until a couple of weeks ago. How do you reconcile the campaign of credibility that you have when you've made those comments about what happened getting off the plane in Bosnia, which totally misrepresented what really happened on that day? You really lost my vote. And what can you tell me to get that vote back?

SENATOR CLINTON: Well, Tom, I can tell you that I may be a lot of things, but I'm not dumb. And I wrote about going to Bosnia in my book in 2004. I laid it all out there. And you're right. On a couple of occasions in the last weeks I just said some things that weren't in keeping with what I knew to be the case and what I had written about in my book. And, you know, I'm embarrassed by it. I have apologized for it. I've said it was a mistake. And it is, I hope, something that you can look over, because clearly I am proud that I went to Bosnia. It was a war zone. … So I know that it is something that some people have said, "Wait a minute. What happened here?" But I have talked about this and written about it. And then, unfortunately, on a few occasions I was not as accurate as I have been in the past. … You know, you can go back for the past 15 months. We both have said things that, you know, turned out not to be accurate. You know, that happens when you're talking as much as we have talked. But you know, I'm very sorry that I said it. And I have said that, you know, it just didn't jibe with what I had written about and knew to be the truth.

Clinton goes out of her way in this response to emphasize that she knew that what she repeatedly said happened in Bosnia was not "accurate", that is, that it was false. She admits knowledge, so what about intent? Clearly, it was no joke when she made the false Bosnia claim. It's hard to believe that she intended to be caught saying something false, that is, she must have expected that the people who heard it would be deceived. So, there was intent to deceive. In other words, she as much as admits that she lied except that she never actually utters the word "lie". Instead, she uses such long-winded doublespeak as "I just said some things that weren't in keeping with what I knew to be the case", "on a few occasions I was not as accurate as I have been in the past", "[I] said things that…turned out not to be accurate", "it just didn't jibe with what I…knew to be the truth" in order to avoid saying that little three-letter word.

Law professor Cass Sunstein has a new book, Nudge, cowritten by Richard Thaler. Sunstein is also writing about the book at The Volokh Conspiracy. Here's how he describes some of the motivation for it:

Of course a major impetus for libertarian paternalism is a series of empirical findings showing, not that people are "irrational," but that they are (in Thaler's term) quasi-rational, departing from rationality in predictable and specified ways. There's a ton of research on this question, but many of the proposals in Nudge rely on the immense power of default rules.

Apparently, the idea is to use "default rules" to "nudge" people into making more rational decisions. It sounds interesting. Do I have to mention that I'd like a review copy? Nudge, nudge.

Source: Cass Sunstein, "Libertarian Paternalism and the 'Yeah, Whatever' Heuristic", The Volokh Conspiracy, 4/14/2008

"Because of us…chickens already have 'bleak lives.' Because of us, they already live in 'concentration camps.' Indeed, as we have seen in this paper, they are totally in the hands of Dr. Mengele. … It is fitting that Heinrich Himmler, the head of the Nazi SS, was a chicken breeding experimenter…. As tens of millions of birds who are being tortured in laboratories throughout the world know well, that man may be dead, but his genes have a life of their own."

Source: Karen Davis, "VII. Conclusion: Night of the Living Dead for Birds", The Experimental Use of Chickens and Other Birds in Biomedical and Agricultural Research, 2003

Acknowledgment: Thanks to Dominic Sisti.

Blurb Watch: The Year My Parents Went on Vacation

I call your attention to an ad for the new movie The Year My Parents Went on Vacation not because it quotes New York Times film critic A. O. Scott: "Seductive!" Of course, the exclamation point was added by the anonymous ad writer, and the word was taken from the following sentence:

"The Year My Parents Went on Vacation" is most seductive when it focuses on the details of daily life in the lower-middle-class Săo Paulo neighborhood Bom Retiro.

This is not quite the same as calling the film as a whole "seductive", as it's possible that it might be "most seductive" in those scenes but not very seductive overall. However, as blurbing goes it's a misdemeanor.

Rather, I call your attention to this ad because its first blurb is simply four stars attributed to critic Joshua Rothkopf of Time Out New York. For reviewers who use a star rating system, four stars is often the highest rating a movie can get, the equivalent of 100 on a hundred-point scale. However, there are some critics who use a five star system, in which case four stars is an 80, which is still a high rating.

I've been aware of this possible source of ambiguity previously, but hadn't seen a good example of it actually being exploited in a review until now. The ad, of course, doesn't say which system Rothkopf uses. In fact, Rothkopf's rating is on a six star scale, so that the rating is only a 67. What started out looking like a rave is really only a slightly above average rating. That's a contextomy worth noting!

Carl "The Numbers Guy" Bialik is giving a probability quiz based on Leonard Mlodinow's new book The Drunkard's Walk―another book that I wish someone would send me a review copy of. Regular readers of the Fallacy Files should recognize a number of the questions and not be fooled by them. I hope to see many familiar names in the list of those who get all eight correct!

Update (4/17/2008): The Numbers Guy has now posted the results of the quiz and his answers to the questions. I will comment here on only the first and last questions, which involve familiar fallacies:

1. Wrong answer: 99%. Since the problem says that the there is a 1% rate of false positives, the temptation is to think that 99 out of 100 athletes who test positive will have used the drug. The mistake here is the base rate fallacy, namely, leaving out of consideration the base rate, that is, the fact that only 10% of the athletes use the drug.

I want to be able to have a small list of formal logic fallacies and a larger informal list so that in dealing with psychic claims we can first write:

All of the actual logic books I have perused spend most of the text in meadering laments of the importance and history of logic. I am looking for the six most common formal fallacies and the twelve most common informal fallacies. The lists I have seen are too extensive or do not have an interpretive example. Suggestions?

I should warn you in advance that there is not, as far as I know, any research on the relative prevalence of logical fallacies. In fact, it's rather difficult to imagine how such research could be carried out. So, the lists below are entirely the result of my sense, based upon informal experience, of what fallacies are most common. It also should be kept in mind that a fallacy―at least, as I define the term―is a common type of error, so that all of the fallacies listed in the files are at least common enough to merit a name. However, there is an exception to this requirement for the formal fallacies, which are part of formal systems of logic and may be uncommon. Also, I have not attempted to list the fallacies in order from most common to least common; rather, I've just listed what seemed to me the six most common formal and dozen most common informal fallacies.

Good luck with your meeting!

I haven't commented previously on the "100 years" war contextomy of John McCain because it seemed to have been sufficiently debunked in the mainstream media. Annenberg Fact Check debunked the quote back in February, the Washington Post's Fact Checker recently gave it two Pinocchios, and the St. Petersburg Times' "Truth-O-Meter" pronounced Barack Obama's use of it "false". So, all three major independent factchecking groups have debunked it, yet the Obama campaign continues to use it.

McCain made an interesting comment in answer to a question about the "100 years" remark (my emphasis):

"Could be 1,000 years or a million years," he said. "We have bases in Kuwait right now. We have bases in South Korea and Japan, Germany. I mean (the allegation by critics is) a straw man. It's a fallacious argument by people who don't understand that it's not American presence, it's American casualties. If we can get American casualties down and eliminate them, Americans are not concerned―in fact, they may be glad we have a secure base in that part of the world as we do in Kuwait."

He's exactly right: those who use the contextomy are attacking a straw candidate.

Solution to LSAT Logic Puzzle 3: No. Since Dr. Boole is going (5), either Dr. Carroll will go but Dr. DeMorgan won't or DeMorgan will but Carroll won't (2). On one hand, suppose that Carroll goes and DeMorgan doesn't. Then Dr. Euler can't be going, because Carroll is (3). On the other hand, suppose that DeMorgan goes and Carroll doesn't. Then Arnold can't be going (1). Since Arnold isn't going, neither is Euler (4). So, in either case, Euler won't be attending the conference.